For those that read our blog post this week, the Horse vs Zebra tail now has an extra dimension.

Following complaints of a pencil taint in water, a compound was identified as potentially being responsible.  We were supplied with a standard of this, plus a water sample displaying a different type of taint.  As part of the investigation, we connected up an olfactory detector to our MultiFlex GC/Q-TOF instrument and assessed the odour of the compound suspected to be responsible.  We also assessed an extract of the tainted water.

What we discovered we thought was Quite Interesting (although it may not make the next series of QI!).

The ‘pencil’ compound (2-tert-butyl-5-methyl-1,4 benzoquinone) standard was observed to give a strong pencil/graphite odour as expected.  When we evaluated the water extract, along with several other aroma active compounds detected in the complaint water, there was one which the assessor described as ‘pencils’.

Ah ha we thought… we know what this is!

However, on closer inspection, although very similar mass spectra were obtained, the identity of the compound was not the same.  The accurate mass data indicated a different formula.  Suspicious? – well we wanted to check, so the water extract was then spiked with the standard and re-evaluated.  This confirmed 2 regions in the chromatogram giving an odour described as ‘pencils’.  The mass spectra correlating with the previous findings.  Figures 1 and 2 give more detail.

To put the relevance of this into context, drinking water regulations stipulate national standards for colour, odour and taste, and companies are required to investigate the cause of any adverse result.  According to the DWI Annual Report in 2014, a total of 21 tests from consumers taps in England and Wales exhibited a positive ‘pencil’ odour. 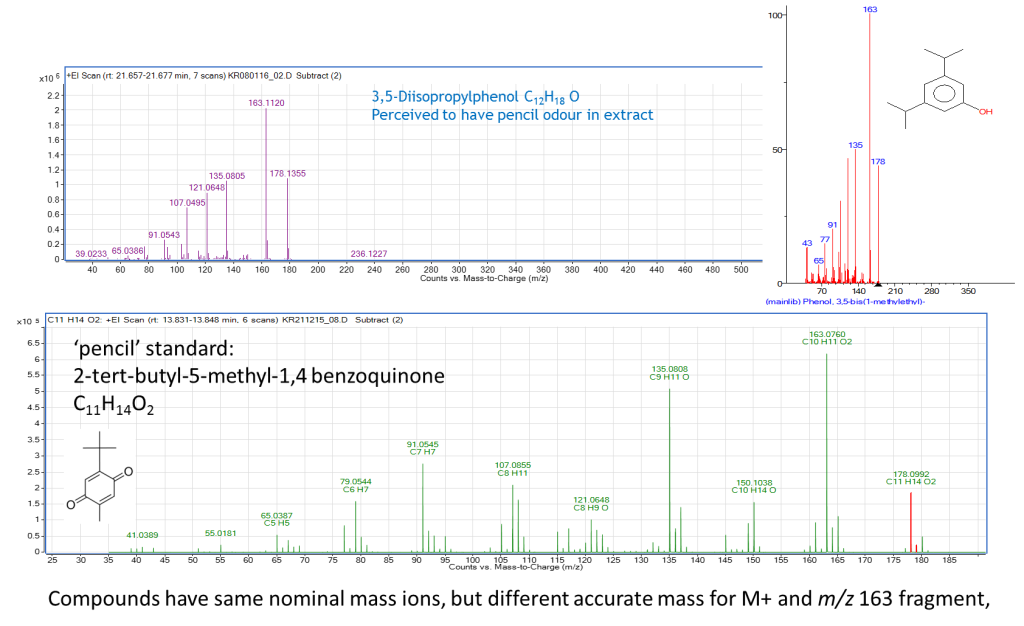 Do You See a Horse or a Zebra’s Shadow?