GERSTEL GmbH was founded by Eberhard Gerstel Senior in 1967 and 2017 is the company’s 50th year in business.

This is a remarkable milestone and, as just one of a number of celebrations organised for this anniversary year, GERSTEL held its annual EMEA&I distributor meeting in Prague.

Jeff Stubbs and I both attended, together with John Quick of ALS.  As a longstanding and valued customer of both Anatune and GERSTEL, John was welcomed as a VIP guest speaker.

John gave a great presentation on the remarkable work he does using the GERSTEL sample prep instrumentation that Anatune supplies him with.

Congratulations are due to Pascal and the rest of the team at RIC in France for winning the award for top distributor in 2016.  This award will have been underpinned by a huge amount of hard work.  Well done from all of us here at Anatune.

I was honoured to accept the marketing award on behalf of Anatune. 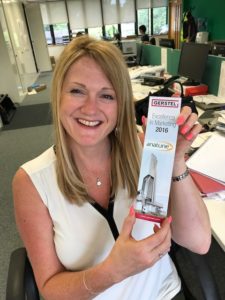 It is one of the marketing industries dirty little secrets that, unlike other sectors, many awards are actually paid for.  To receive a marketing award, freely given (and without money changing hands) is special and counts all the more.  Many thanks to GERSTEL for honouring us in this way.

We also received an award for winning our recent innovation award.  Thanks to our friends at MSC for organising that.