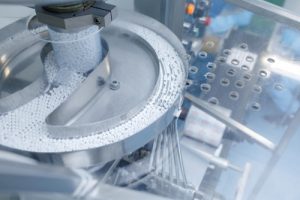 Deadly counterfeit pills have rightly received a great deal of media attention in recent weeks due to more fatalities of high-profile celebrities. To advance understanding of the matter, our partners at LECO have created a new Application Note investigating counterfeit drug analysis with untargeted GC-MS analysis of fentanyl-laced drugs.

In the words of LECO:

“Prince. Tom Petty. Michael K. Williams. Lil Peep. Logan Williams. Daniel Mickelson. Jay Bennett. Mac Miller. Bobby Brown Jr. The list of celebrities lost to fentanyl overdoses is long and growing alarmingly fast year after year. But it’s not just celebrities falling victim to this potent drug. On January 13, 2022, a 13-year-old at the Sport and Medical Sciences Academy in Hartford, Connecticut, was exposed to a lethal dose of fentanyl and died three days later. In 2016, fentanyl surpassed even heroin as the deadliest opioid. But why?

Originally introduced in 1960, fentanyl is 100 times more potent than morphine when it comes to pain killing and anaesthesia. Properly monitored and administered, it can provide immense relief to people in pain.

Due to its extremely high potency, other narcotics, such as heroin or oxycodone, can be cut with trace amounts of fentanyl to produce an even more intense high, upping the selling price of a drug while keeping manufacturing costs low. In some cases, such as many of the known celebrity overdoses, the celebrities had issues with pain or injury prior to their deaths, indicating they may have sought illicit drugs to help their pain management to get them through their performances. Many times, the existence of fentanyl in these products is not even disclosed.

In the case of the high schooler, the fentanyl was found in a powdery form that three students may have ingested, but the entire school had to be closed for cleaning, because some fentanyl can become airborne, and such a fine powder could have been tracked around the school. Fentanyl’s high potency means that a dose of even 3 mg, or the size of a grain of salt, can be lethal. When dealing with trace amounts that fine, highly sophisticated lab equipment is necessary to measure non-lethal concentrations.

Suffice to say, most counterfeit drug makers do not use equipment of that caliber.

Forensic laboratories, however, do, and some of them have partnered with LECO to use the Pegasus® BT to investigate counterfeit drugs and how easily deadly doses of fentanyl can be passed off as “dupes” of less dangerous, more commonly known pills.”

Sample Preparation – Why Wouldn’t You Automate?